Particularly impressive in the central role, the young Kazakh-American, Los Angeles based tenor Timur Bekbosunov above gave a lovely performance, a calm center in the midst of the craziness ... thoroughly absorbing and a complete triumph - Civic Center

As the humor resonates in the absurdity of the language, in Wold's compelling composition, the basic mood of UKSUS is of political oppression, need and hopelessness. In view of the impoverishment of the European population, the chamber opera is like a threatening cloud in the sky. - Kleine Zeitung

Daniil Kharms and his OBERIU friends were born during the time of the Tsars, fancied themselves aristocrats, true individual artists following in the footsteps of Kazimir Malevich and other troublemaker artists, were caught up in the rise of the proletariat, and died during the time of Stalin and the Nazi invasion of the Soviet Union, swallowed by the general horrors of the time that swallowed up so many. During those horrors, while living in abject fear and panic, they laughed and laughed and laughed, loved wordplay and nonsense, rejoiced in absurdity, and held onto that love and joy and laughter to very end, to their ambiguous deaths in custody of The State, the secret police, the NKVD. And so we hope that we, now, living in our own time of horror, among those who impose their piggish and tinpot will on others, can find our own place of exultation, our own reason for continuing in this life, and finally our own triumph over all that works to contain us.

box 0: Winter ’42, in which Pushkin is attacked and robbed.
box 1: Nadeždinskaja, 11, in which Fefjulka and Pushkin dream of happiness together.
box 2: Three left-hand hours, in which we see played before us the appearance of the OBERIU in the Leningrad House of the Press.
box 3: Defeatist Propaganda, in which occurs the arrest and the interrogation of Pushkin. 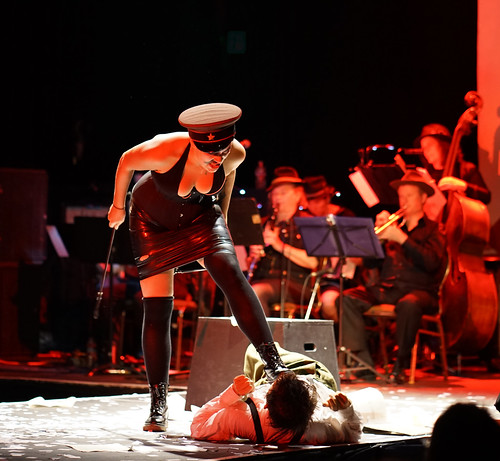 Supported in part by The National Endowment for the Arts (Opera), Zellerbach Family Foundation, and Theatre Bay Area CA$H.

The most recent production in Oakland at the lovely Oakland Metro Operahouse, where I always wanted to perform after witnessing there a fantastic production of Stravinsky's Renard (Ба́йка про лису́, петуха́, кота́, да барана́. Весё́лое представле́ние с пе́нием и му́зыкой) back in '08. This production of UKSUS featured Timur Bekbosunov in the lead role, Nikola Printz as Stalin and the Old Woman, Laura Bohn as Fefjulka, Bob Ernst as Michelangelo, Roham Sheikhani as M2, Jim Cave (the Director) as A Samovar, and a cadre of Soviet soldiers: Sabrina Wenske, Peter Overstreet, Nathanael Card.

Before that at Dance Mission in 2015, the same cast except no soldiers and Duncan Wold in the lead role.