a striking score for winds, percussion and keyboards ... pointing a way into the genre's future. - Andante

...an extraordinary cast ...the veteran Seattle tenor Duykers with his flashing eyes is a massive presence here - artssf.com

Back in late 1994, I was putting the finishing touches on A Little Girl Dreams of Taking the Veil and was itching to start a new opera. We hired James Bisso to do some technical writing at Muscle Fish, the music software company I cofounded. Jim and I got to talking and found out we had a lot of interests in common: Jesus Christ Superstar, dead languages, obscure academic texts, fascism, Roman costume dramas, etc. He also mentioned to me that he had been thinking for a while about writing something on Pontius Pilate. My religious background has made me particularly interested in anything that has to do with Christianity so I jumped on it, without really thinking about how big a project it would be.

Within a month or two we had already written a few scenes, including the first. Jim was a lot slower writer than me at the time, so I wrote a couple of other operas and other things while I was waiting for him and we (along with John Duykers) put a lot of effort into finding an orchestra or opera company interested in the piece. Well, as it turns out, almost no one in the opera world shares our fascination with Pontius Pilate and obscure classical texts, so the project languished for a while. In 1998 we performed some scenes with the Seattle Creative Orchestra in concert. Giving up on the orchestral version, I made a few reduced orchestrations and we decided to go it alone. A big help was Andrew Wood at ODC Theater helping with the second production of A Little Girl in 2000, giving me a residency for Queer in 2001 and then promising to coproduce Sub Pontio Pilato. At the same time, Josef Oberauer, an Austrian tenor who had been in the German language production of Little Girl (die Nacht wird kommen...) asked if he could produce a cut-down version of Pilate in German in Austria accompanied by two keyboards. This took place in Wels and helped us quite a bit in the direction of the piece.

I try to make each opera a unique musical world in language, instrumentation, rhythm – in this case, I wanted something that sounded big and grand and showed the epic sweep of history. It's been interesting to me to go back and rework and reorchestrate the music. I had forgotten many things. One was how Stravinskian the music is, maybe even more so in this somewhat dry arrangement for winds, keyboards and percussion. The opening is reminiscent of Symphony of Psalms, there is a section of Nescio et Excrucior that is almost directly lifted from Pulcinella, although it has a melody that is from a song called Safety in Sports that I wrote for the band Name back in 1982. The beginning of Verum Eikon is actually directly stolen from Petrushka, there is a palindrome in the music of Visum Proculæ which I'm sure was inspired by the palindrome of Canticum Sacrum – the list seems to go on. Stravinsky once said something to the effect that small artists borrow and great artists steal, although I suppose he meant that great artists are able to make something their own, but whatever. I've stolen from myself in the piece too, but I almost always do that. Descensus is an arrangement of a section of my electronic score for the dance Crash by Gay White. I had always wanted to do an orchestral arrangement of an electronic work, since so many people do it the other way 'round.

It's been interesting experience to have this music around for almost a decade of my life without really hearing it. I like a lot of it more than I did when I wrote it. I suppose that's a good sign. 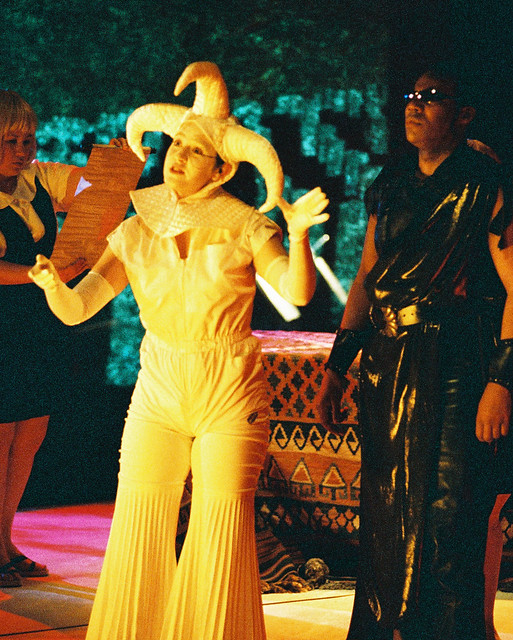